After Labour failed to win the election this year in May 2015  Labour  asked why and said they wanted the normal voter to join and connect again with the Labour Party. They invited the public to join either as member of affiliate membership and as such be allowed to vote in the Labour Leadership Election and be part of forming its direction and future. Labour realised it had cut off from its wide base of support, had alienated the electorate while being totally blind, deaf and totally oblivious.

WHY DID WE FAIL?
https://www.youtube.com/watch?v=IEnBxx5znGM

Here is the email invite. Quite clear the £3 is for the right to vote. Not for administration. 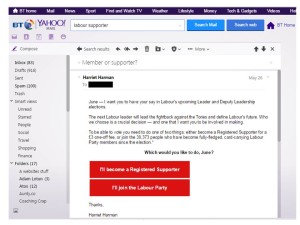 Many signed up. But many did not as not enthused by the candidates on offer. Andy Burnham, Yvette Cooper and Liz Kendall. Many left and said they would never vote Labour again, Politics were dead in their life and so was the Labour Party. SNP had captured an ethic and a passion in the country and their party  that Labour had not.

However, something happened, because many saw and felt the leadership candidates were luke warm and not capturing party, the country or  labour voters or members a move was made to get a traditional Labour and left wing, pro socialist, which means pro society and pro people to a choice of candidate.

A move was moved to campaign via social media for Jeremy Corbyn to be nominated. I did not know him. I was not as left as many, but I saw a man opposed to the direction of political and personal greed, and man who was anti-austerity and the growing selfishness of our country. So I helped to Twitter the need for Corbyn nomination around and Corbyn got the 36 MPs nominations to get in.

Jeremy started talking, People started listening. Labour Party started baulking and the Labour Party and Leadership debate came alive. A Fight for Where Do We Want to Go To Next as a Country and a People. More War? More Poverty? More Austerity? More Taking Away our Basic Laws and Rights, More antagonism to Muslims and minority and ethnic groups, or a chance of Peace? Dialogue? Anti-Austerity, Easing and Feeding the true economy and the people instead of half starving the cow and expecting it to produce.

100,000s rushed in a signed up, enthused especially by Jeremy Corbyn. Labour baulked and was horrified. Labour started calling everyone closet Tories or Trots. Labour changed its mind. Labour started to purge and exclude 100,000s while keeping the money. Decent, loyal, moral and ethical people got purged, including union members,union leaders such as Mark Serwotka of PCS, journalists such as Mark Steel, disabled activists and bloggers who had questioned both Labour and Conservatives over their attitudes, policies and voting record regarding the disabled assessments and welfare reform bills. It involved the purging of a 90 year old lady, a lifelong Labour member and activist who walked the streets and canvassed in the 1940s. No reason, GONE!

People who had already voted have had their vote removed and themselves purged.

It will cost more to appeal and join Labour Party and £10 to access information they have got on you and gleaned from online email or social media accounts, read your blog as a political or disabled activist, or got in touch and asked local friends and Labour Party members to welch/sneak and betray you for any reason.

Who is the Cheats? People or Labour Party?
https://www.youtube.com/watch?v=wVCMNCGou58

We believe this is an attack and an affront to basic British right to a right to vote and free, fair and open elections without fear or prejudice.

The numbers are going up, Thousands still being purged everyday without reason. This affects British democracy and Labour Party integrity. It affects the true and trustworthy outcome of the Leadership election.  Even if it is the result that many want, it will be a false one.

The trouble and damage to the Labour Party long term is far more than its small minded, short sighted immediate gain.