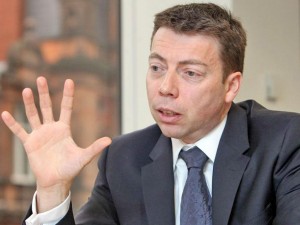 All smiles: Labour’s General Secretary Iain McNicol, who used party funds to ensure party members could not vote in the leadership election – unless they paid more money into party funds.

From VoxPolitical Blog of Mike Sivier

This is a disastrous day for British justice.

The five members of the Labour Party who launched legal action to overturn a decision by Labour’s NEC barring them from voting in the party’s leadership election have said they will not take their case to the Supreme Court – because the price is too high.

This is despite all the evidence that the Court of Appeal’s decision was wrong in law and that one of the judges should have declared an interest, having been given a lucratic job by Labour Party Blairites.

Meanwhile, Labour’s NEC has been using party members’ money to defend its decision to block anyone who joined after January 12 from voting – unless they bought a vote at a price of £25, between July 18-20.

A statement on the crowdfunding page for the Labour Five – which raised more than £93,000 for the legal case – runs as follows:

Unfortunately, given the costs involved in pursuing the case further (the fee for getting the case even heard at the Supreme Court is around £8,000), we have taken the decision that this is where this particular legal case has to stop. But the case wasn’t in vain – although we didn’t succeed in reclaiming votes for the 130,000 disenfranchised members, we did win in the High Court, exposing facts which have spurred important conversations about the role of the Labour Party membership and the NEC.

We won’t be raising the 100,000 target any higher, this should cover the costs we were ordered to pay (around 80,000) plus our own legal fees (we have been very lucky and received a combination of reduced fees and no fees for the work we’ve had done).

Again, thank you all so much for your support – and the fight for justice isn’t over yet, although this particular stage of it is over. The 5 of us are going to stay in the Party and work to try and change things for the better within the Party’s structure itself. We’d really appreciate it if you would join us in that – either as members already, as potential members, or as supporters.

This Writer was informed of the decision by a Vox Political reader, who stated: “It is a shame, as I believe they and a huge number of loyal party members were wronged by a wrongful decision but it is not fair to ask ordinary party members to take on a huge financial risk with a tiny little clique who control the purse strings of the Labour Party.

“We all owe the Five a great debt of gratitude for having taken the case as far as they have.

“They have exposed McNicol, Lillis and Watson – among a very few others – for the appalling individuals they truly are. Never again will decent people seek their company.”

Paddy Lillis, Iain McNicol and the other NEC members who supported this misuse of party members’ money should be ashamed, and ought to be shunned by right-thinking members of the party.

They have literally bought into the Conservative Party’s view that justice should only be available to those who can afford it. And they did it with our money.

Link to article on VoxPolitical

« WHY CAN’T I VOTE?
WITH FRIENDS LIKE JONESY WHO NEED ENEMIES – THERE, I HAVE SAID IT! »
View more posts from this author