Where is the survey entrusted to Jeremy Corbyn’s team to account for those purged?  Meanwhile fill in ours. We promise to publish regularly LABOUR PURGE SURVEY

On getting into power and being elected Leader of the Labour Party Jeremy Corbyn has never published the results of that survey.  They actually adapted it to get more information, and asked if people contacted Labour central office and what response they got.

WHERE IS THAT SURVEY AND THE RESULTS

I  and LabourPurge.org believe that all true members of Labour Party and its values, and all those who were purged and were persuaded to in trust filled the in survey should demand that it be published.

I have been to Labour HQ, they refuse saying Labour Party is exempt from FOI requests. However, I am sure as the survey has my name and details and contact details it comes under the Data Protection Act in regard to looking after and safe guarding information in surveys and using it for only the reason it was meant to be used.

In addition I like many paid double subs and £10 to access the date used for rejecting us. Having now got it and believe it could and should be challenged I am told by Labour that I can do nothing. It is almost like a smug look on their face as they tell.

This was Matt Beresford and George Monbiot’s form, 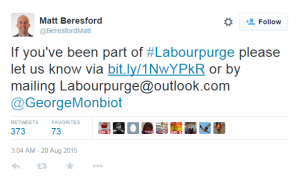 The first form was started by Matt Beresford to account for and monitor those who were being struck off  right to vote in Labour Leadership Elections. It is now taken up and monitored by Jeremy Corbyn’s tea

The form still appears to be here

« Shop
The Purged »
View more posts from this author